HAIPHONG, Vietnam — “It’s a good opportunity. Our world is changing,” replied VinFast CEO Thuy Le when I asked her why Vingroup is burdening itself with cars.

Vingroup, which created and owns VinFast, was founded in Hanoi, Vietnam, in 1993, and it has since become the nation’s largest private conglomerate. Founder and Chairman Pham Nhat Vuong stands proud as the first Vietnamese billionaire and the richest person in Vietnam. His group is everywhere: in addition to the cars, scooters, and buses built by VinFast, Vingroup’s web of products and services includes luxury resorts, theme parks, real-estate projects, shopping malls, hospitals, and schools. Its 2020 revenue represented approximately 2.2% of Vietnam’s GDP, and its three listed companies are worth almost $39 billion. Cars can easily initially look like an unnecessary distraction.

But, to the CEO’s point, the automotive industry is at a turning point, and newcomers have their best shot in decades to hop in. VinFast’s short-term strategy for the North American market is clear: It wants to launch in 2022 by offering a pair of electric crossovers called VF 8 and VF 9, pictured below, and it plans to begin building both in North Carolina by 2024. Can it pull it off? I trekked to Vietnam to find out. 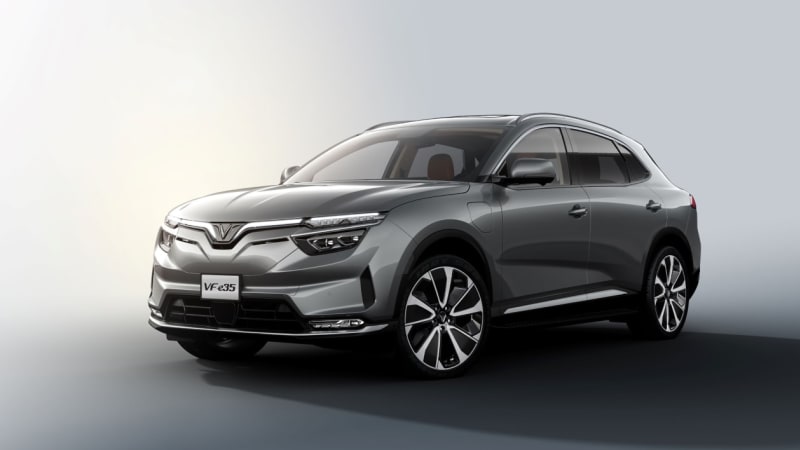 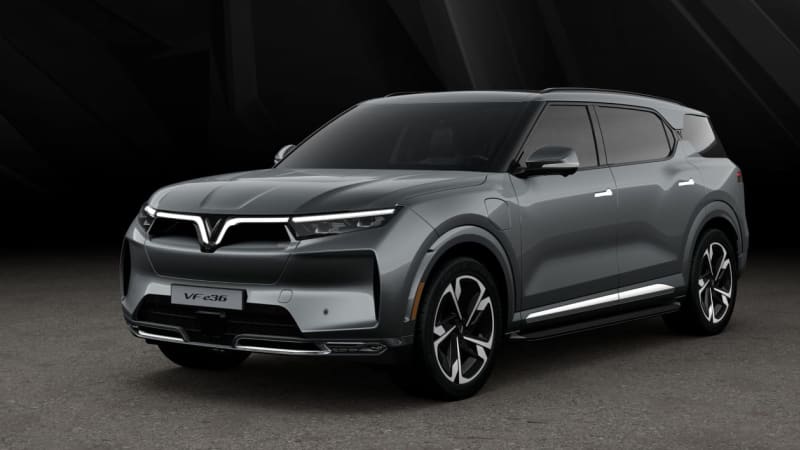 VinFast is used to defying the odds: It built a state-of-the-art factory on what was essentially a swamp near Haiphong in record time. It was founded in September 2017, and it released its first cars on the Vietnamese market in November of the following year after buying General Motors’ Vietnamese operation. Its first models were a truly international hodgepodge of parts: The Lux SA2.0, for example, is a third-generation BMW X5 (F15) whose exterior design was reimagined by Pininfarina. Most are powered by a four-cylinder engine, but a small handful were called President and built with a 6.2-liter LT1 V8 — the same engine that powered the C7 Corvette. Yes, these guys took a German car, gave it an Italian design, performed an American heart transplant, and built it in Vietnam. It’s absolutely fascinating.

Those are VinFast’s beginnings, though, and we won’t see them on our shores. What we’ll see are the VF 8 and the bigger VF 9, which were introduced at the 2021 Los Angeles Auto Show as the e35 and e36, respectively. Fully electric, the VF 8 comes standard with a dual-motor all-wheel-drive powertrain rated at 348 horsepower and 368 pound-feet of torque when buyers select the entry-level Eco trim. Next and last (for the time being) is the Plus, which posts figures of 402 hp and 457 lb-ft. VinFast will initially offer standard- and extended-range battery packs. Get the former, which offers a usable capacity of 82 kilowatt-hours, and maximum driving range should check in at 260 miles for the Eco and 248 for the Plus. Get the latter, whose usable capacity is rated at 87.7 kilowatt-hours, and those figures increase to 292 and 277, respectively. Note that these figures are preliminary. Other details (such as charging times) will be released closer to the car’s on-sale date, but we already know that owners will receive two complimentary charging sessions on the Electrify America network of charging stations.

If you want a gasoline-powered model, you’re out of luck. VinFast is going electric-only. 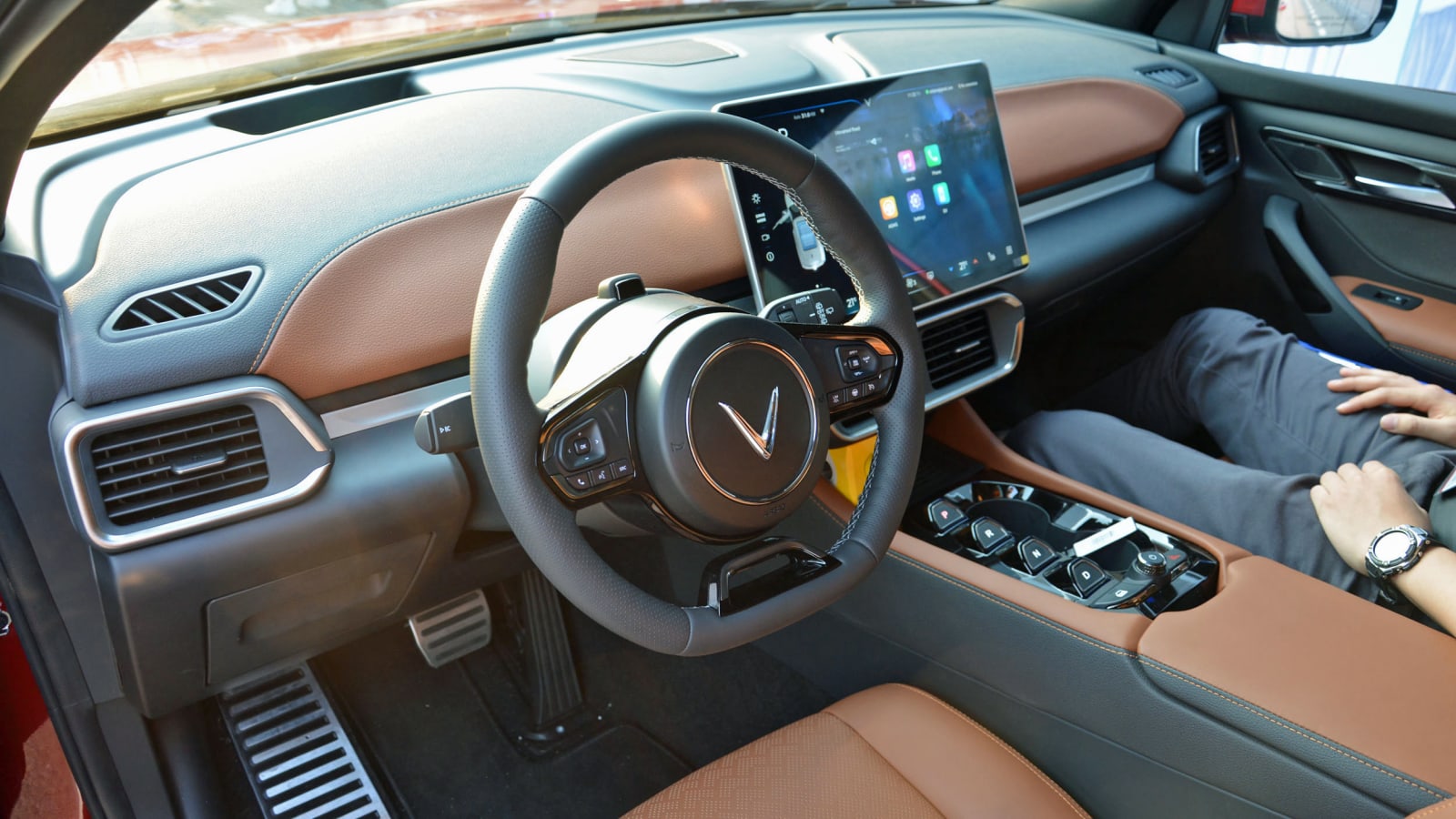 Only the VF 8 (pictured above) was available to take for the quickest of quick spins on the grounds of VinFast’s factory. It measures 187 inches long, 74.8 inches wide, and 65.4 inches tall, figures that make it about 2 inches longer and an inch wider than a Volkswagen Tiguan and almost exactly as tall. That’s not a coincidence: VinFast is aiming for the mainstream, and several executives I spoke to stressed that they view the company’s main competitors as brands that sell gasoline-powered cars. Their aim is to lure you out of a Toyota RAV4, not a Tesla Model Y. This also at least partially explains why the VF 8 wears a relatively conventional exterior design. Its front end is unique, and it’s not a carbon copy of an existing model, but Webster’s could use its proportions to define the term “crossover.”

Inside, the VF 8 is an exercise in simplicity. The driver faces a two-spoke steering wheel, and the dashboard is dominated by a 15.6-inch, landscape-oriented touchscreen that replaces most of the buttons, dials, and switches normally found on the center stack. All that’s left on the center console is a volume knob (thank you, VinFast!), a button used to lock the doors, another one for the hazard lights, and four buttons to select Park, Reverse, Neutral and Drive. Pay no attention to the big, “sound the alarm!”-like switch visible in our photos. Carmakers routinely install a kill switch in their pre-production prototypes. I can’t comment on the build quality since the VF 8 is not ready for production yet, and development work is ongoing, but the cabin offers an adequate amount of space for both the front and the rear passengers.

Driving impressions are limited because I spent less than a mile behind the wheel. The VF 8 seems to drive like most electric cars. It’s silent and reasonably quick off the line; VinFast quotes a 0-to-60-mph time in the 5-second range depending on the trim level. There was no one-pedal driving mode, but the engineer riding shotgun with me explained it’s a feature that will be added to the production model, and a company spokesperson added that motorists will be able to select several levels of regeneration using a menu in the touchscreen.

What’s at least as interesting as the car is the factory that will build it. Located about two hours east of Hanoi, the Vietnamese capital, the VinFast factory is an astonishingly modern facility that stands out with a level of automation that borders on science fiction. The place looks empty, almost eerily so, because robots do most of the work without requiring much in the way of human intervention. VinFast’s battery plant is running at about 80% automation; its body shop is at 98% automation. I’m told to expect a similar level of automation in North Carolina.

It’s a massive complex, too. It’s capable of building 250,000 cars, 3,000 city buses, and 250,000 scooters annually. Vietnam’s economy is growing rapidly, the country’s middle class is consequently expanding, and demand for cars is expected to increase significantly in the coming years. VinFast is ready: planned expansions will increase the factory’s annual car-building capacity to 950,000 units by 2026, while the scooter line should be able to churn out 500,000 units. Building a million scooters annually is possible if there is enough demand.

VinFast’s approach to the automotive industry — and this sets it apart from many of the companies big and small that have tried to plant a stake in the United States — is “sink or swim.” That’s why it’s going straight for the American market (and a handful of European markets as well) instead of starting off easy by selling a few cars here and there in countries where homologation laws are loose enough to put a VIN on a dead raccoon. Making it in America is easier said than done, but if you can make it there you can probably make it anywhere.

Pricing for the VF 8 Eco starts at $40,700 with the smaller battery pack and $41,000 with the slightly bigger one; you may as well enjoy the extra range. Plus models are priced at $47,700 and $48,000, respectively, while the VF 9 ranges between $55,500 and $61,000. These figures are competitive, and that’s partly due to the fact that buyers will initially need to lease the battery; it will uniquely not be included in the purchase price. The tradeoff, and it’s a significant one, is that since you won’t own the battery you won’t be the one paying for its replacement when it no longer holds a charge. VinFast knows that’s a concern with electric cars, and it will replace the battery pack free of charge if its capacity drops below 70%. Customers will have the option of purchasing the battery starting in 2024, and VinFast expects about half of buyers will take that route.

VinFast is currently taking reservations for both of its upcoming models, and deliveries are scheduled to begin by the end of 2022. The first cars will come from Vietnam; production in the $2 billion factory that the firm is building in North Carolina is scheduled to start in 2024. And, don’t expect to see your local Chevrolet dealer pick up a VinFast franchise: The company will sell its cars directly to consumers through so-called design studios set up in strategic locations, including shopping malls, as well as bigger stores (some with a service center). While that’s a quicker and more straight-forward way to get cars on the road, it’s a strategy that pegs the company’s growth on the state-by-state regulations surrounding direct sales.

VinFast has the funds, the ambition, and the knowledge to merge into America’s automotive landscape. It does not have the brand image, but it can turn that to its advantage by using clever marketing tactics. Risks are aplenty, however. It’s linking its entry into (and its success in) the American market to rising demand for electric vehicles, and the inconvenient fact is that battery-powered cars remain a niche here. It’s a niche that is undeniably growing, you can’t attend a product presentation without hearing the “future is electric” jingle, but the rate of this growth is difficult to predict. But, on the other hand, VinFast will initially launch in states that tend to view EVs favorably. It’s planning on opening no less than 30 stores in California before the end of 2022, for example.

Taking risks is how Toyota, Honda, and Kia, among others, beat the odds and became household names in America, and some of these carmakers started with even less experience than VinFast. Toyota set up its American division in October 1957 in an old Rambler dealership located in Hollywood, and it sold 288 cars (including a single Land Cruiser) in America in 1958. Viewed in this light, VinFast’s long shot is worth taking, and hitting the bull’s-eye may be easier than it sounds. It’s now or never. Like the CEO said, the world is changing.

Electric Indy 500? ‘It’s among the most interesting questions in motorsport’