MUNICH, Germany – November 2022 promises to be a mark-the-calendar date for BMW, with the launch of its all new 7 Series promising a technical tour de force taking the German limousine into a brave new world.

For starters, the next generation of the 7 Series will arrive in the United States with inline six, V8 and pure EV power, and there’s a 50-mile plug-in hybrid to follow them up next year. Secondly, it will be pre-equipped to deliver Level 3, eyes-off, hands-off driver assistance technology. Thirdly, it’s the first time, BMW admits, that it has ever really bothered to focus on rear-seat luxury and comfort.

That’s reason enough to drive two prototypes – one a V8 and the other the i7 EV – to see if BMW’s flagship has finally completed its multi-generation evolution from the most athletic limousine in the world to something that can compete with a Mercedes-Benz S-Class on pure comfort.

The risk BMW has taken here is immense. Even Mercedes-Benz developed the S-Class as an S-Class and the EQS EV as an EQS EV. And here is BMW lumping all of its powertrains together under one four-door bodyshell.

They had good reasons to do it, though, including production manufacturing, and the new 7 Series (and the 5 Series to follow it) utilizing a versatile architecture that can eat batteries or fuel tanks with equal aplomb. 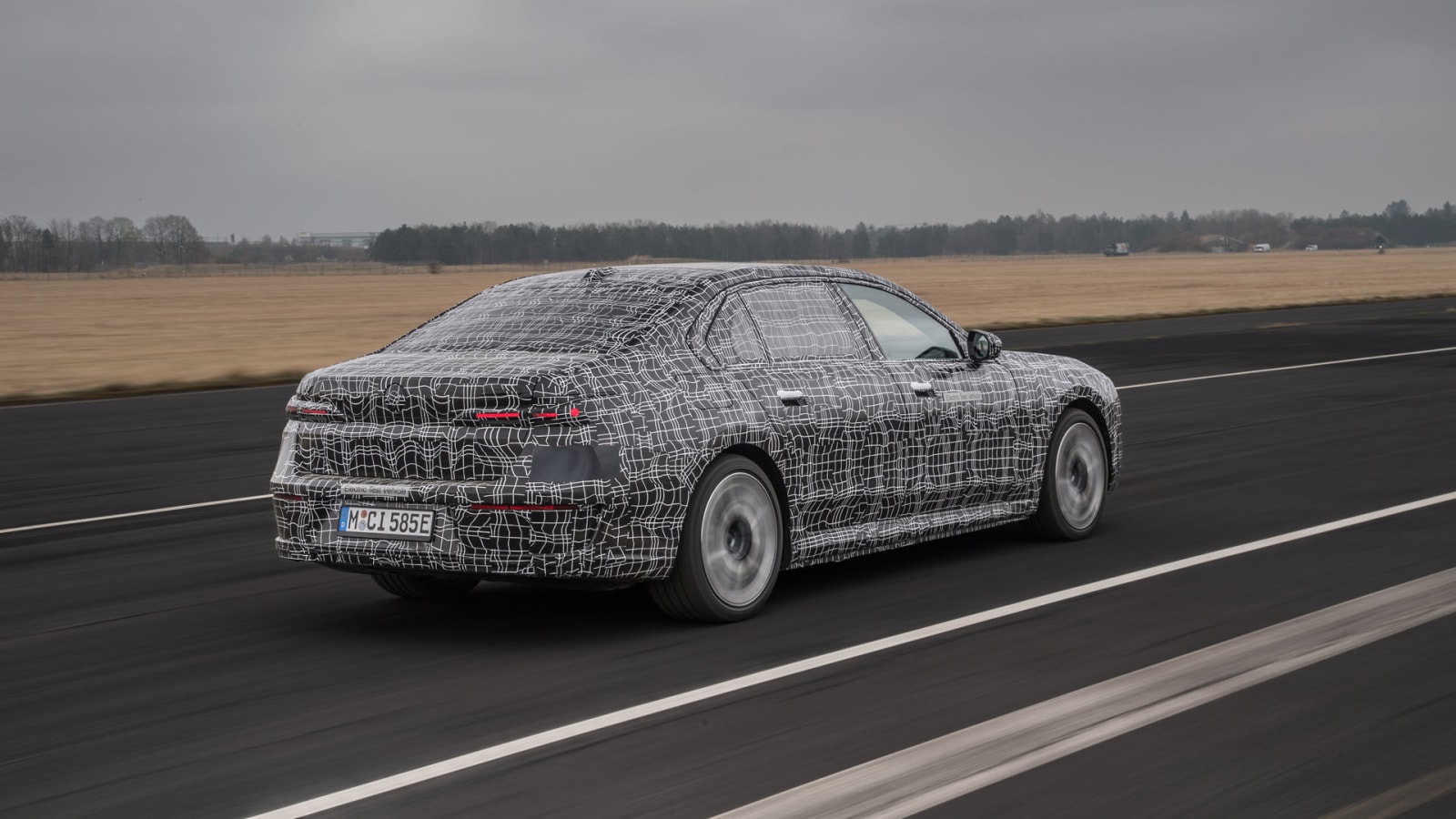 The two 7 Series cars – the V8 and the i7 – will share a common body and it’s imposingly huge, spanning 17.7 feet in the long-wheelbase model that will be standard in the United States. It’s also taller, especially in the front and the hood line, and it’s heavy. While BMW isn’t locking down the numbers yet, the difference between the entry 740i with the turbo inline-six gasoline engine and the twin-motor, big-battery version of the i7 is almost 1,100 pounds. Remember, that’s all in the same body style!

BMW didn’t give us much of a chance to look at the interior, and covered it with felt flaps most of the time, but they have promised luxury they’ve never used before, especially in the rear seat. They talked so much about rear seat comfort that it was almost apologizing for not getting around to it before.

The reason they’ve attacked the rear seat so hard this time around can be summed up in one word: China. It’s a recurring theme. Every second 7 Series is sold in China, with 70% in total sold in Asia as a whole. The Chinese market told BMW it wanted more rear legroom, more rear toys and an EV body that looked the same as every other 7 Series, which they wanted to be more aggressive looking. And here we are. 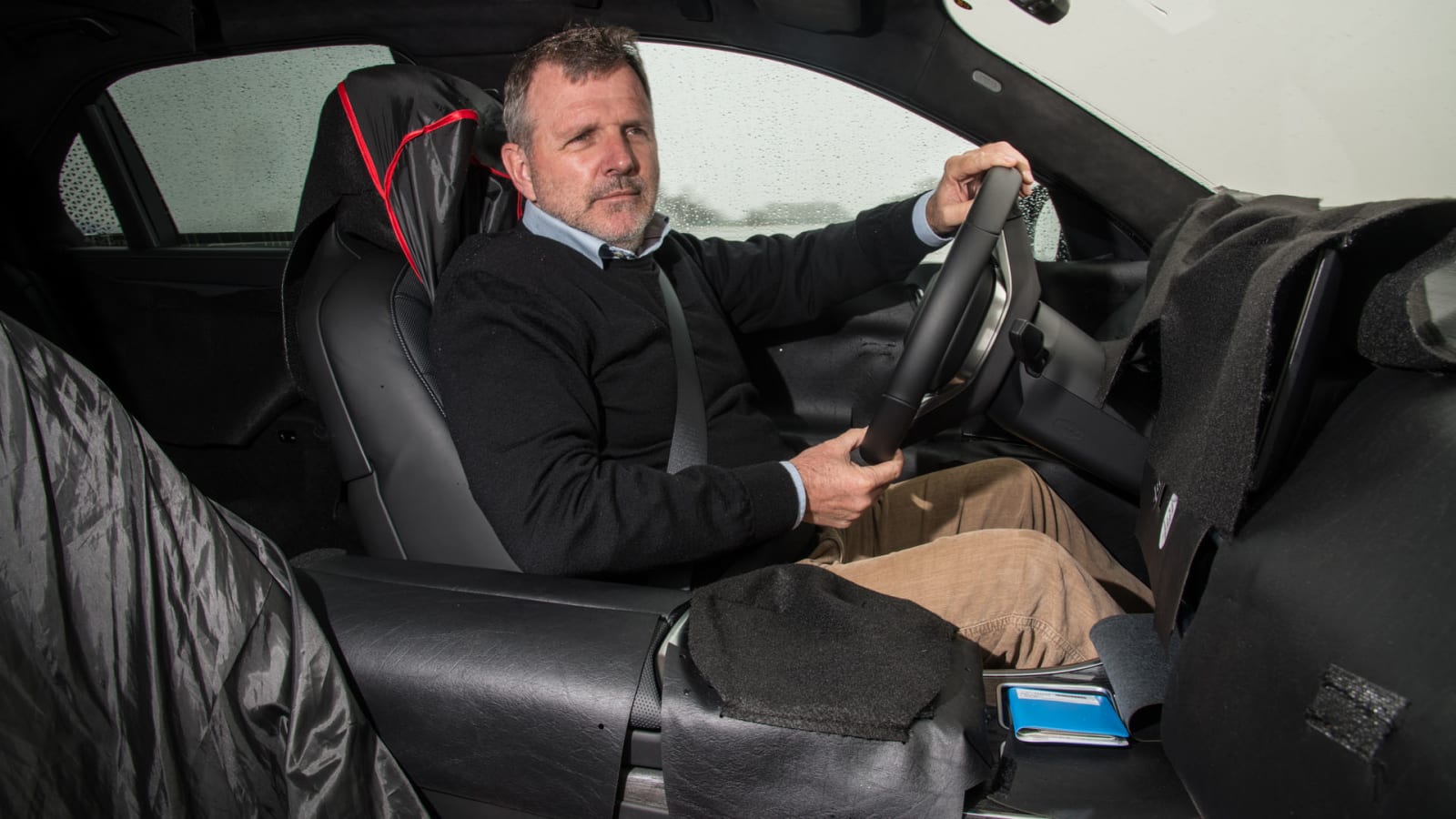 BMW wasn’t massively forthcoming on the powertrain details of the cars we drove, but the V8 twin-turbo (probably a 760i), had about 545 horsepower, and this version of the i7 felt suspiciously like it shared the iX 50’s powertrain.

So, we’d be guessing more than 500 horsepower, a battery pack beyond 100 kilowatt-hours (an EQS has a 107.8-kW pack) and it felt easily capable of running to 60 mph in under 5 seconds. The first impressions, even from the front seat, are that BMW has indeed lifted the 7 Series to a new level of comfort. It might not surpass what Mercedes-Benz has done with the S-Class, but it’s at least not behind it anymore.

The silence from the rear seats is palpable compared to the outgoing 7 Series, with very little wind noise and almost no road noise whatsoever, with the tires, the suspension and the wheel arches all muted.

It’s even more pronounced up front, where 80 mph on the autobahn showed the loudest single sound input to be the windscreen wipers blasting away at the Bavarian snow. And that was in the V8. It remains a lovely powertrain, with oodles of torque, sophistication dripping from its every effort and enough power to punch to 60mph in four seconds. It’s mated to standard all-wheel drive and an all-new eight-speed transmission, which has big shoes to fill considering the outgoing one was the gold standard of the industry.

But if the V8 feels like a muscle-bound gentleman in a suit, the i7 takes it to an entirely new level of sophistication and refinement. The hunt for noise, vibration and harshness has gone down many a rabbit hole, including noise cancelling, but also filling the enormous HL (heavy load) 285/35 R21 front and 255/40 R21 rear tires with an acoustic-absorbing foam to soak up road noise before it ever hits the suspension, much less the cabin. And, yes, run-flats are dead at BMW, so it’s not that kind of foam. 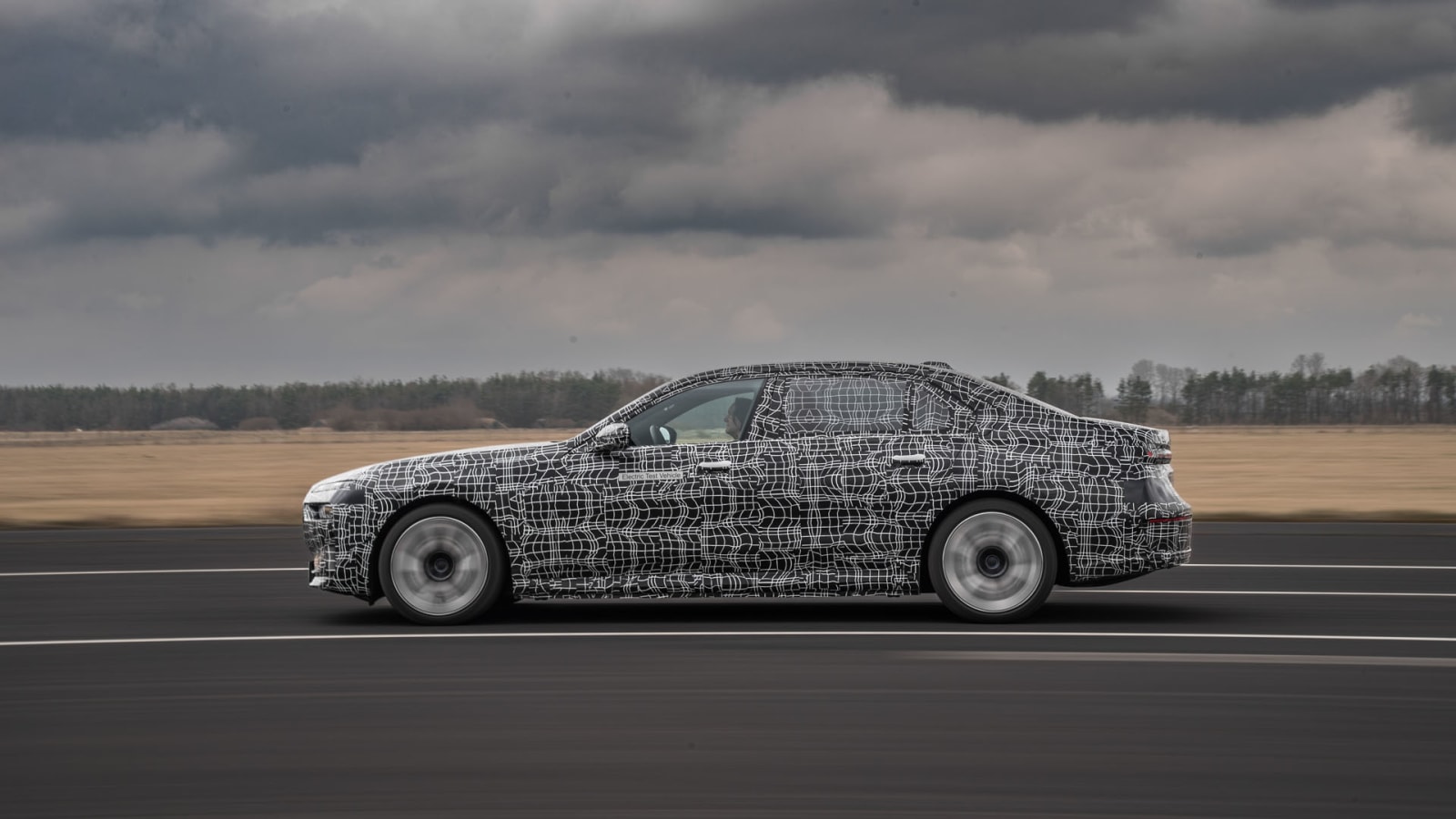 All next-generation 7 Series will use air suspension, with 48-volt active roll stabilization provided through the electrified anti-roll bar, and there’s rear-wheel steering. Like the S-Class and the A8, the 7 Series also leans into corners to minimize the movement felt by the passengers.

Unmistakably, the i7 feels like the more organized of the two 7 Series prototypes we tested, with easy punch, but a surprisingly planted cornering stance and the good manners to ease its way through corners. It leaves you forgetting its portliness, all while carrying astonishing speed.

It isn’t the fastest EV limo around, at least not in a world with a Lucid Air in it, but it’s quick enough because, as BMW explained, when the owner is being chauffeured in the back seat, he or she doesn’t care to feel 1g of launch acceleration. The electric motors feel and sound relatively low revving, which can trick you into thinking it could use more punch, but then you look at the speedo and it’s doing 100 mph, rather than the 65 mph you thought, and you realize it’s all pretty good, actually.

The brakes, under-utilized in the i7, pull strongly, and whatever BMW is claiming about ride comfort is true. It is easily the most lump-absorbent BMW of all time – and it should be, with at least 2.5 tons pressing down on the Earth. 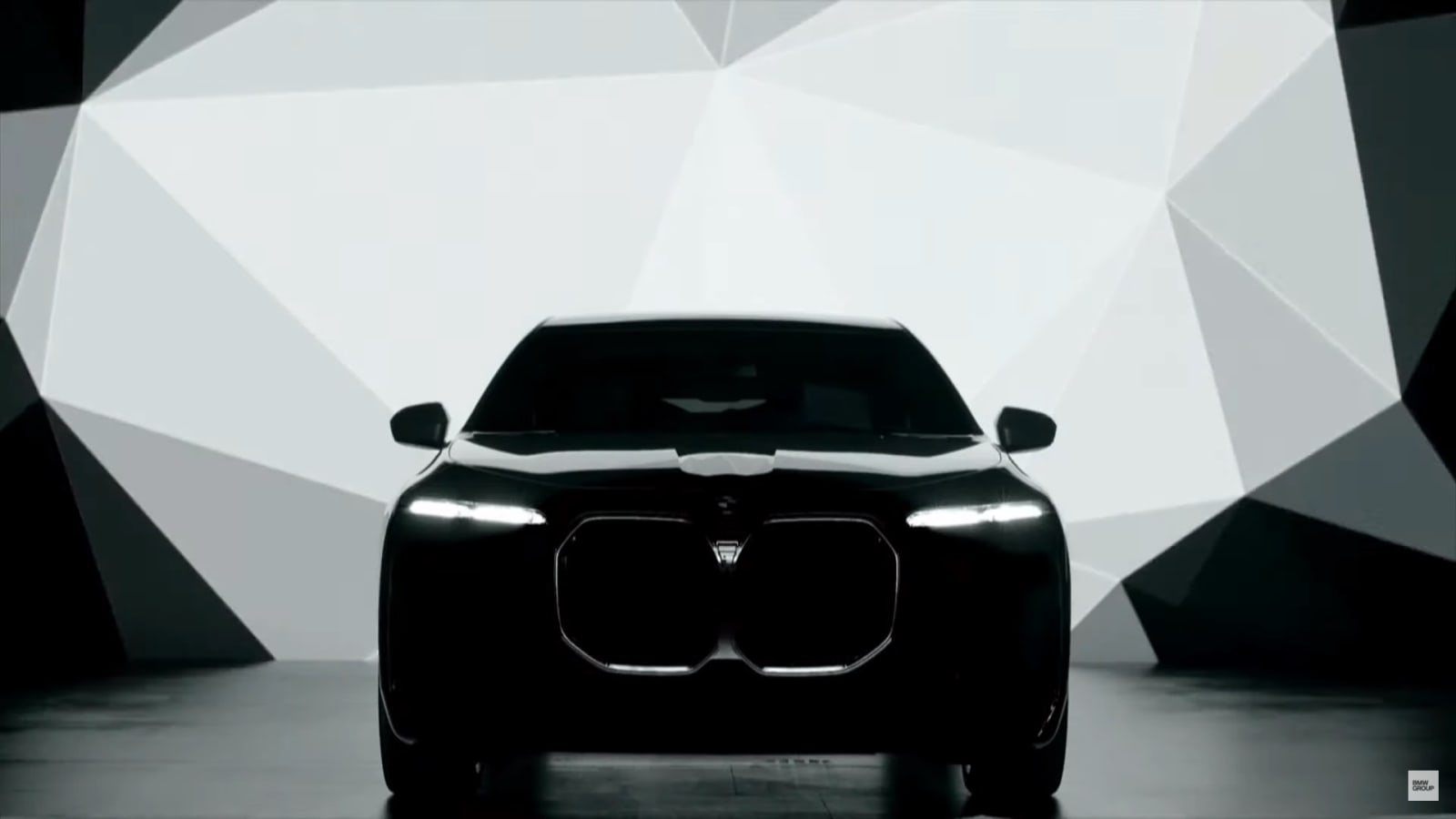 A word about BMW’s Level 3 autonomy here, because while it’s coming, it will follow the launch by at least a year as BMW proves to its risk assessors that it’s good enough for the company to accept all the legal liability for it. BMW claims that with each new model it has to show governments and assessors that the car can drive a billion kilometers without a fatal crash, which is more than 20% better than the average of human drivers.

The sensors are in place even without Level 3, though, as they’re needed for and to enhance the various crash protection and advanced driver assistance systems. There are four short-range radars, a long-range radar and a medium-range LiDar, plus a horde of ultra-sound sensors, and it all takes the sensing ability out to 984 feet. When it does arrive, the Level 3 BMW Traffic Jam Assist, developed with Mobileye and Intel, has been engineered to allow the driver to “do anything but fall asleep because he has to be ready to take over” at up to 38 mph.

That may not seem quick enough to most Americans, but Chinese drivers spend 80% of their driving time at less than 18 mph. Remember, half the 7 Series sold in the world are sold there. No wonder back seat comfort has become so important.

There’s more, though, and it’s useful. The parking assistant has been expanded, taking the existing parallel and 90-degree parking capability and adding three-point turns (less needed now with four degrees of rear-wheel steering). It can also park itself, without you in it, provided you and your app-equipped phone remain within about 20 feet of it. That should be helpful because this is a big car after all, and it might not be easy to open the door inside some garages. With all the emphasis on the back seat and comfort in general, perhaps achieving the status of Ultimate Parking Machine will be the 7 Series future goal.