Right from the start, the 2022 GMC Hummer EV has been advertised with superlatives, mostly in reference to its specifications. GMC has even called it a “supertruck” in its own materials. And while we’ve received a taste of the truck before, only now have we finally got our hands on the production-spec model, and had the opportunity to drive it both off-road and on the street. What we’ve found is that the Hummer EV is undoubtedly a supertruck, much the same way that a Ferrari or a Lamborghini is a supercar. It totally delivers on its incredible capabilities, but there are compromises. And they’re worth being aware of before plunking down the more than $100,000 a first-year Hummer will run you.

That six-figure truck is the version we tested, the Edition 1, which actually rings in at $112,595. It’s the only version in production for now, with lower trims coming in the next couple years. It’s sold out, but many of the features will be available on the next highest trim level, the EV 3X. Among those features are the three motors, torque vectoring, “Watts To Freedom” launch mode, four-wheel steering, removable glass roof panels, 35-inch tires, Super Cruise, power rear window and MultiPro tailgate. In other words, although you can literally no longer order an Edition 1, you can still order a Hummer EV with nearly the same specification.

We’ll start where most owners probably will: mashing the throttle. No one can resist seeing what 1,000 horsepower and 1,200 pound-feet of torque will feel like. It’s even a tad more torque in Watts To Freedom mode, which preemptively runs the cooling system to enable the additional twist. That mode allows the Hummer to hit 60 mph in 3 seconds, and the drama is dialed up with visual, audible and haptic cues. But even without engaging launch mode, the Hummer EV impresses and delights with its acceleration. In addition to pinning you to the seat, the entire truck squats in an exaggerated fashion. It’s absurd, especially considering the truck’s curb weight that surpasses a truly astounding 9,000 pounds. That’s several hundred pounds more than the heaviest GMC Sierra HD 3500 diesel dually. Of course, that weight, as well as the nature of electric motors, means the party starts to calm down as the speed increases.

The weight is noticeable in other areas, too. Hauling the burly beast down from speed takes a fair bit of pedal pressure, though it does still stop reasonably quickly. The regenerative braking can also be increased in a number of ways: by pressing the steering wheel paddle, shifting from “D” to “L,” and enabling One-Pedal Mode. It can make slowing down easier, but can also be quite aggressive and might not be to everyone’s taste.

On-road handling isn’t too bad, but the weight still plays a role. The steering has a good feel, starting out light at low speeds for easier maneuvering, and picks up some comfortable heft with greater velocity. It even has some feedback, although it’s a bit imprecise off-center. Some of that may be because of the off-road tires. Those tires don’t offer much grip, and with the weight, the Hummer isn’t the most eager to change directions. But the truck does feel stable and composed in corners for as long as the tires hold, and even with moderate body roll.  The four-wheel-steering is also extremely handy for U-turns and threading through parking lots. 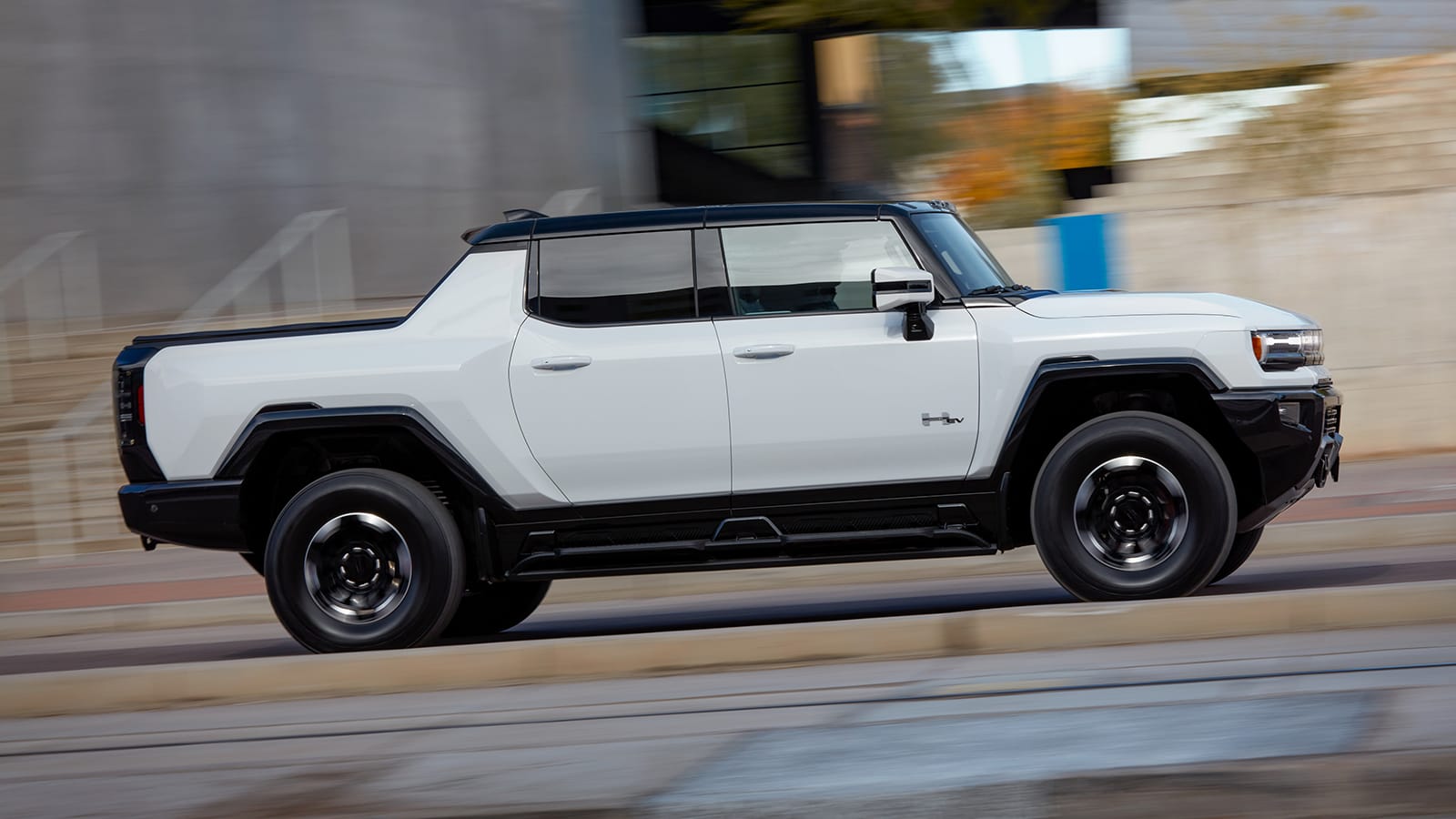 Though it was difficult to evaluate ride quality on Arizona’s flawless pavement, we feel pretty confident saying the Hummer should maintain a comfortable ride regardless of road conditions considering how well it does when there’s no pavement at all. It was never upset by bumps, and has an impressively stiff body and chassis. Furthermore, the Hummer EV Edition 1 comes with the latest version of Super Cruise. Not only does it handle hands-free highway driving very well, it also manages automated lane changes and passing, and does so impressively. It makes for a truck that could be a great long-distance cruiser, especially with its 329-mile range and the ability to take advantage of 350-kW fast chargers thanks to its 800-volt electrical architecture.

That is if it weren’t for how noisy the Hummer can be on the highway. Yes, this electric car is loud. But instead of powertrain noise, it’s wind and tire noise. The tire noise is at least something that can be easily rectified — simply swap out the 35s for more road-oriented rubber or order your Hummer without them. The wind noise isn’t really addressable – just look at the thing. The noise isn’t a total dealbreaker, but it’s disappointing for such an expensive vehicle.

The interior also has some conflicting aspects. Unlike the old Hummer H2, the Hummer EV is quite enormous inside with acres of head, leg and hip room. The seats are thickly cushioned and large enough to be comfy for just about anyone. The glass roof panels are nice for light, but they lack shades and instead rely upon an odd blue tint – the sun can still end up in your field of vision or create annoying glare on various interior surfaces. Durability and easy-cleaning were clearly at the top of mind for GMC designers as materials include appropriately rugged plastics and faux leather. Playing with different colors, textures and details like the slats, rivets and Moon topographic map print does a good job of elevating the interior’s ambience despite those rugged materials, but there’s no denying they may still feel out of place for the price. This is not a Mercedes G-Class. 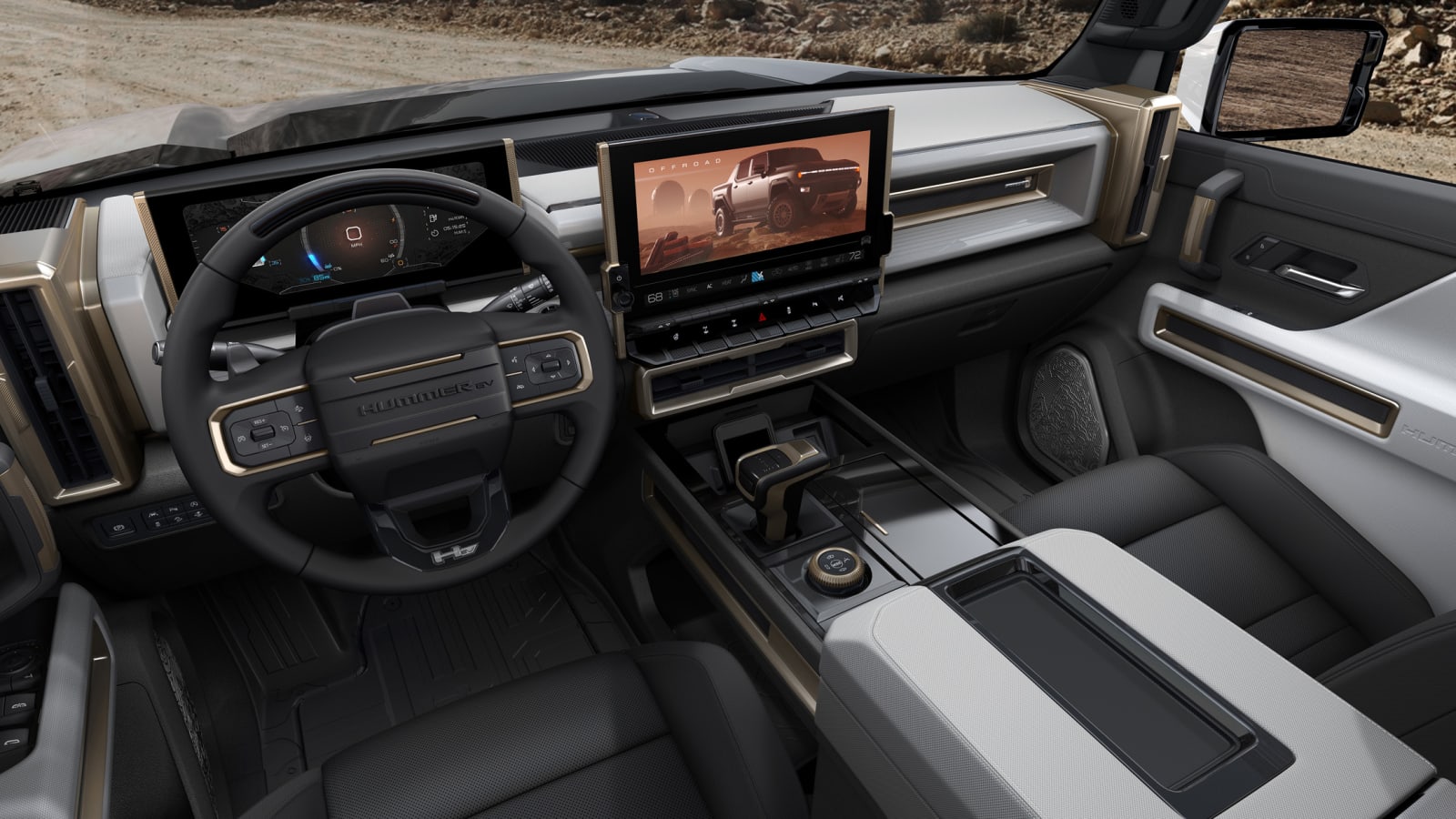 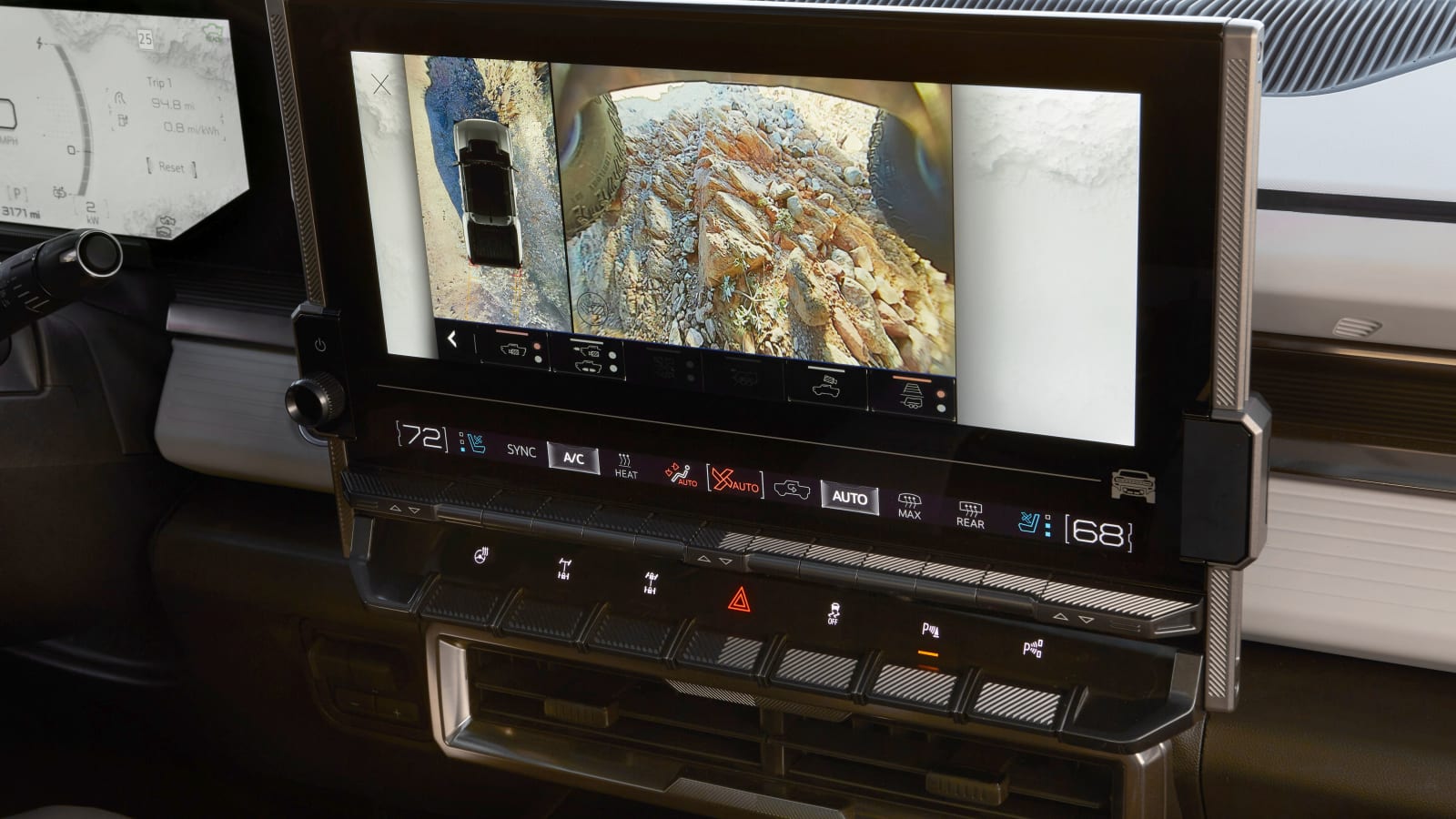 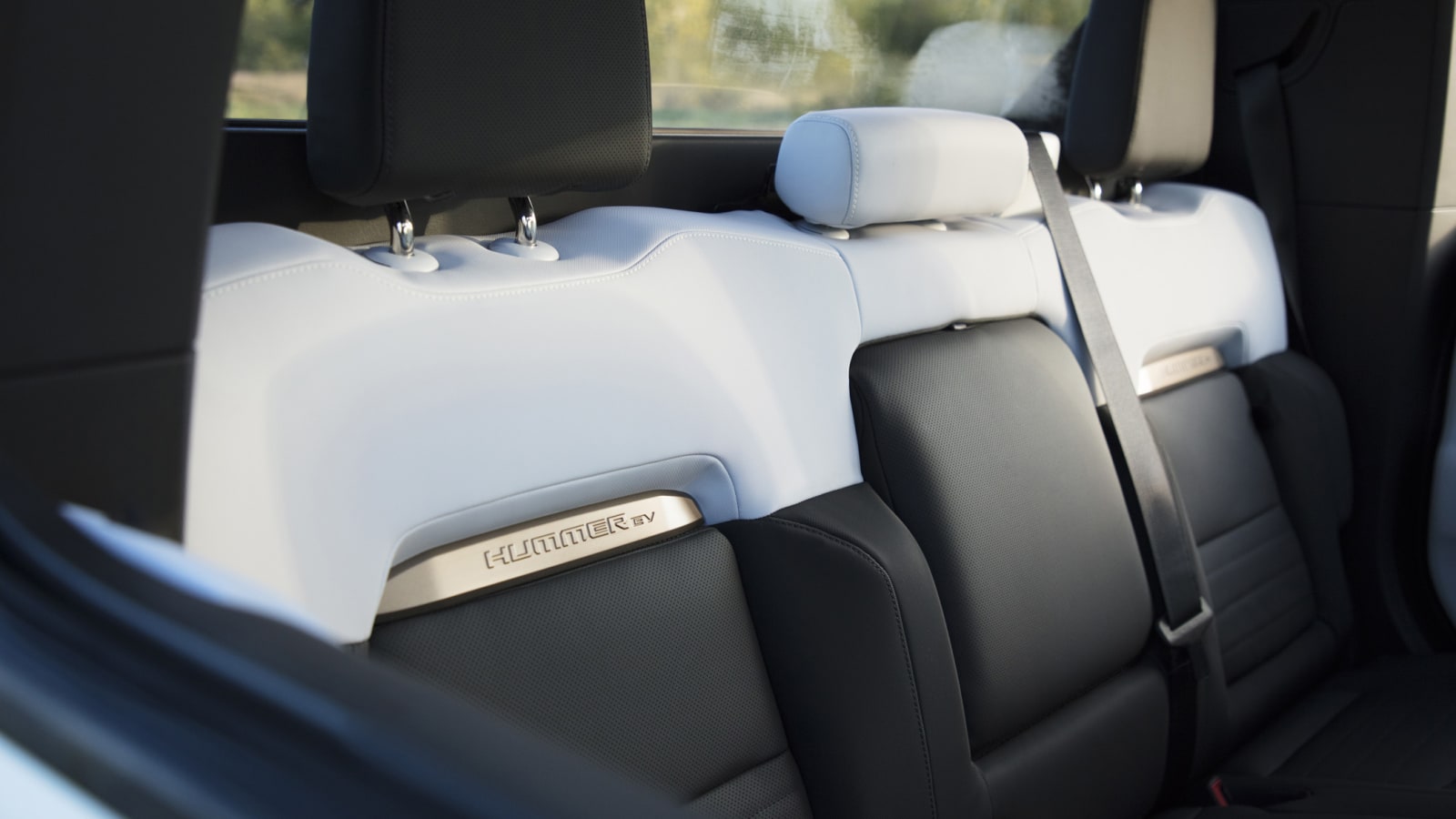 The infotainment and instrument screens (measuring 13.4 and 12.3 inches, respectively) are superb, though. They’re bright, high-resolution, and feature smoothly animated graphics for drive modes and more. The fonts are all tailored for the Hummer’s design, too. The touchscreen is brilliantly responsive, features easy-to-press icons, and has customizable shortcut icons for quick access to your most-used functions. Also appreciated are the physical buttons for adjusting climate controls and driver functions. It even has the all-important volume knob.

Any compromises on the road virtually evaporate once the Hummer gets off-road. As we alluded to earlier, the suspension handles rough paths great, keeping the truck under control and passengers relatively comfortable, even as the pace picks up. The four-wheel steering is massively helpful, reacting quickly and feeling shockingly natural. It makes it easy to bend the Hummer around obstacles and tight corners. Add in the myriad cameras (18 views in total, including under the truck), and it feels very nimble on trails. You’ll still need to be mindful, though, as the Hummer’s width rivals that of a Raptor. No amount of gizmos can change that and trail pinstripes are likely. 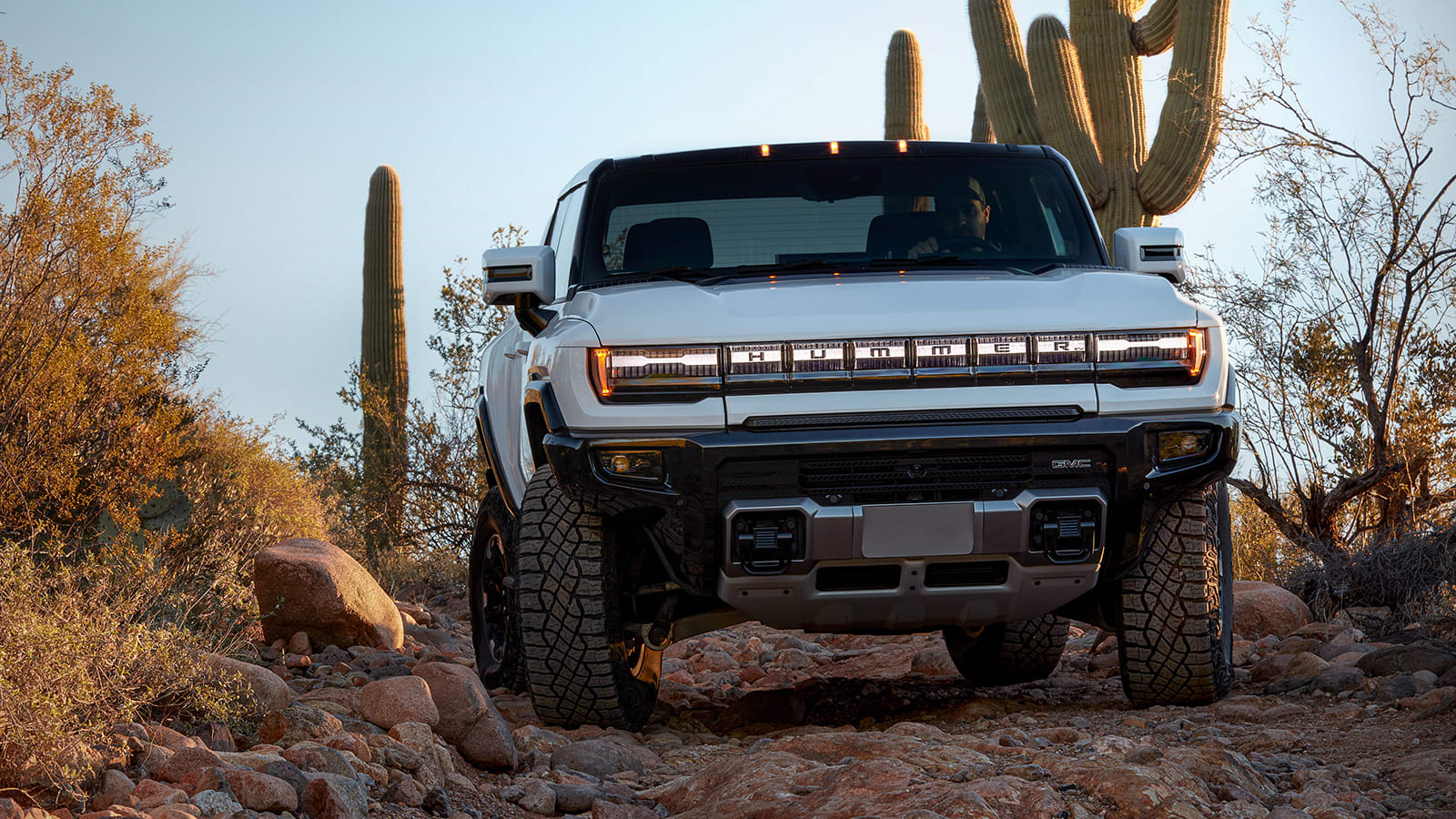 The Hummer’s slow speed prowess is even more impressive. The Terrain mode plus shifting into “L” lets you crawl around virtually with one pedal and allow for precise and minute throttle applications. The use of brakes in this setup also helps keep the truck in place when you don’t want to move without the need to drive with two feet over obstacles. It even pulls the same special cooling trick Watts To Freedom does to allow for more torque to creep over obstacles. Those off-road tires that can be such a liability on pavement are unsurprisingly an advantage off of it, and when coupled with the throttle control and torque, helps the massive Hummer breeze up nasty hills and bumps without breaking a sweat. It does have a mechanical front locking differential and can virtually lock the dual rear motors for maximum traction, but the truck’s basic motor controls managed wheel spin so well we never needed to use the lockers. Except for its width, the Hummer is an all-around off-road monster.

With the Hummer’s amazing power, range, capability and practicality, it’s unquestionably the supertruck GMC claims it is. And as such, its $112,595 price tag feels justified. But like a supercar, it makes serious sacrifices for its extreme capability in an area that doesn’t have much to do with the daily drive (in this case, off-roading as opposed to a supercar’s prowess on a track). So if you’re just looking for a flashy, luxurious ride, you may want to consider something more traditional. But if you want one of the most outrageous trucks in the world, something to scare your neighbors’ Raptors and TRXs, the Hummer is your ride, and worth every penny.