The Mercedes-AMG SL launched with two levels of V8 potency, but now a four-cylinder option is (maybe) joining the lineup with the Mercedes-AMG SL 43. We say maybe, because Mercedes still isn’t sure if the U.S. will get the SL 43. A company spokesperson sent us the following statement:

“The Mercedes-AMG SL 43 is currently still under consideration for the U.S. market. We do not have any details to share regarding U.S. availability at this time. We look forward to launching the iconic all-new AMG SL with the Mercedes-AMG SL 55 and Mercedes-AMG SL 63, which will both arrive in U.S. dealerships in late spring.”

While we wait for Mercedes to make its mind up, we’ll tell you all about this new model that may or may not be coming here.

The SL 43 uses the M139 engine out of the CLA 45 that we already know and love, but there’s an electric twist this time. Instead of a traditional turbocharger, the SL 43 is equipped with an electric exhaust gas turbocharger, the first of its kind in a series production car. Mercedes provides a great description of how it works, so we’ll paste it below for you.

“An electric motor around four centimeters thin is integrated directly on the turbocharger shaft between the turbine wheel on the exhaust side and the compressor wheel on the intake side. Electronically controlled, this drives the shaft of the turbocharger directly and thus accelerates the compressor wheel before the exhaust gas stream starts to drive it conventionally.” 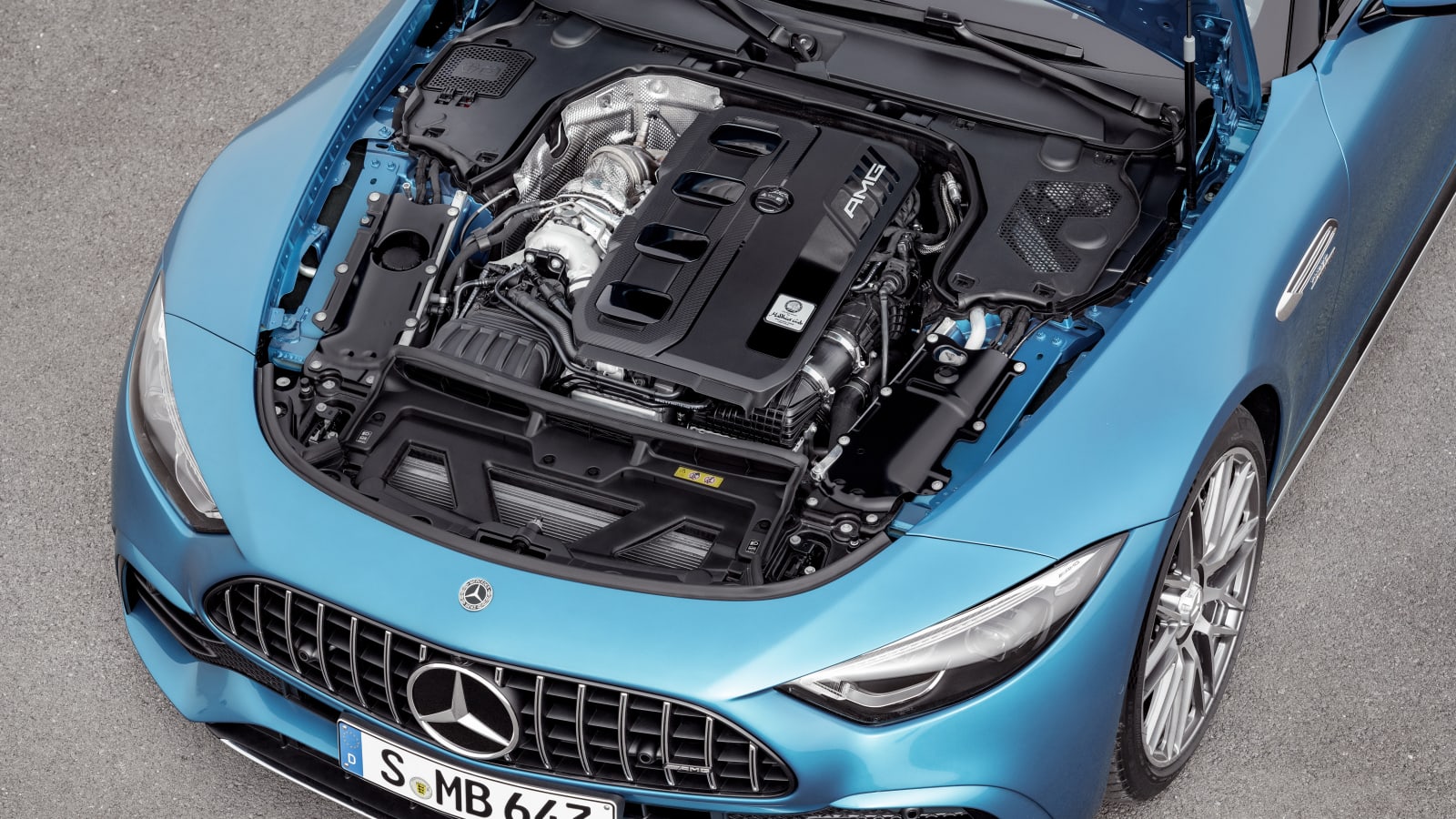 This means better throttle response and less lag between when you tap into the throttle and when the called upon acceleration occurs, since there’s no waiting for exhaust gases to spin up the turbocharger. Mercedes also says to expect more torque at lower revs, and since it doesn’t require exhaust gas to drive the turbine, it’s able to maintain boost pressure even when you’re off the throttle. So, when you hop back on the gas pedal after lifting, you should expect to have consistent, immediate and predictable acceleration.

Mercedes is able to drive this electric turbocharger via the car’s 48-volt electrical system. The turbo setup is derived from technology used by Mercedes’ F1 team, and Mercedes says it “is a direct derivative of the development successfully used by the Mercedes-AMG Petronas F1 Team for many years.”

Moving beyond the wild tech, the high-tech engine produces 381 horsepower and 354 pound-feet of torque. The belt-driven starter generator that functions as a mild-hybrid system can provide an additional 14 horsepower for short bursts. We’ll also note that this is the first time this engine is mounted longitudinally instead of transversely, since it’s traditionally been used in front-wheel-drive layouts. Meanwhile, the SL 43 is rear-wheel-drive-only. Mercedes also mated this engine up to its nine-speed multi-clutch transmission. Using launch control, Mercedes says it’s good for a 0-62 mph sprint in 4.9 seconds and a top speed of 170 mph. 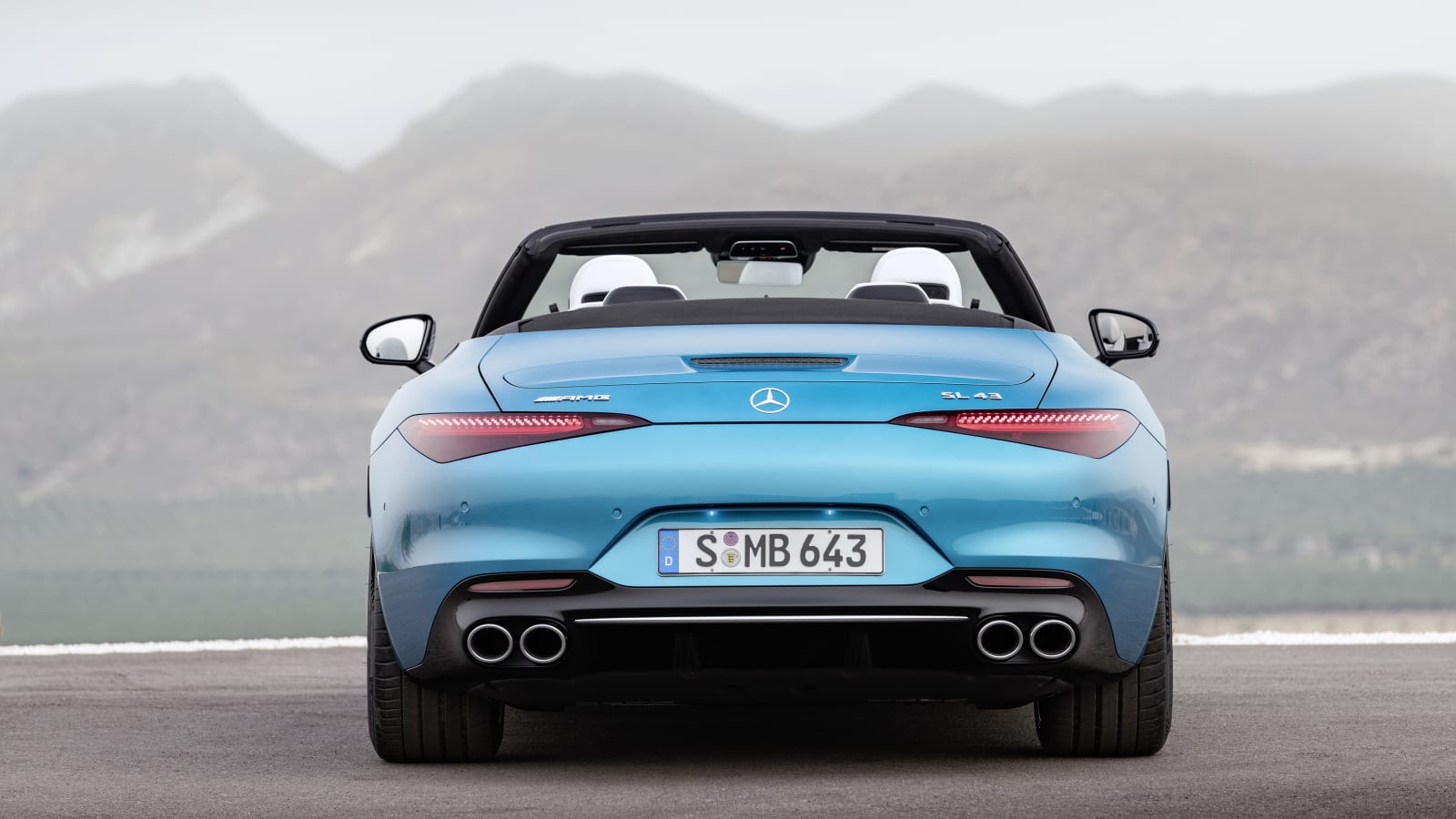 You’ll be able to tell the SL 43 from other SL models from its “SL 43” badging in back. However, Mercedes also fits unique front and rear aprons to the four-cylinder model, and the quad exhaust features round outlets instead of angular exhaust tips. It’ll come standard with 19-inch wheels, but you’ll be able to optionally add 20-inch or 21-inch wheels. Passive dampers are standard, but you can optionally add AMG’s adaptive dampers. Rear-axle steering is optional, and the list of extras is really never-ending in the usual Mercedes fashion. We suspect a lower curb weight will be cause for improved handling, but Mercedes did not provide a weight with this initial announcement.