Mercedes-Benz is gearing up to reveal the next-generation GLC-Class. The two-row SUV is Mercedes’ most popular model, and we’re getting both a preview of its looks and lots of details about the car today.

The photos speak for themselves, above. You can see the GLC wrapped in fairly concealing camouflage, but through this, we can already see a rather handsome crossover taking shape. The real value in Mercedes’ news drop today concerns all of the mechanical details and features it has revealed alongside the photos of extreme winter testing.

Mercedes tells us that the base engine is an updated 2.0-liter turbocharged four-cylinder with a newly added starter-alternator integrated into the transmission that goes with the car’s new 48-volt electrical system. This makes it into a mild hybrid, as the starter-alternator provides off-the-line help in the form of 23 horsepower and 147 pound-feet of torque. The engine itself makes the same 255 horsepower as before, but its torque rating is bumped up to 295 pound-feet, an increase of 22.

We also expect to see two plug-in hybrid options for the next-gen GLC in North America, one meant as a green, economical choice, and the other as a fire-breathing AMG variant. Assuming the GLC follows the same course that the C-Class sedan is set on, we’ll ultimately see a very high output four-cylinder matched with a powerful electric boost in the top-shelf AMG model. 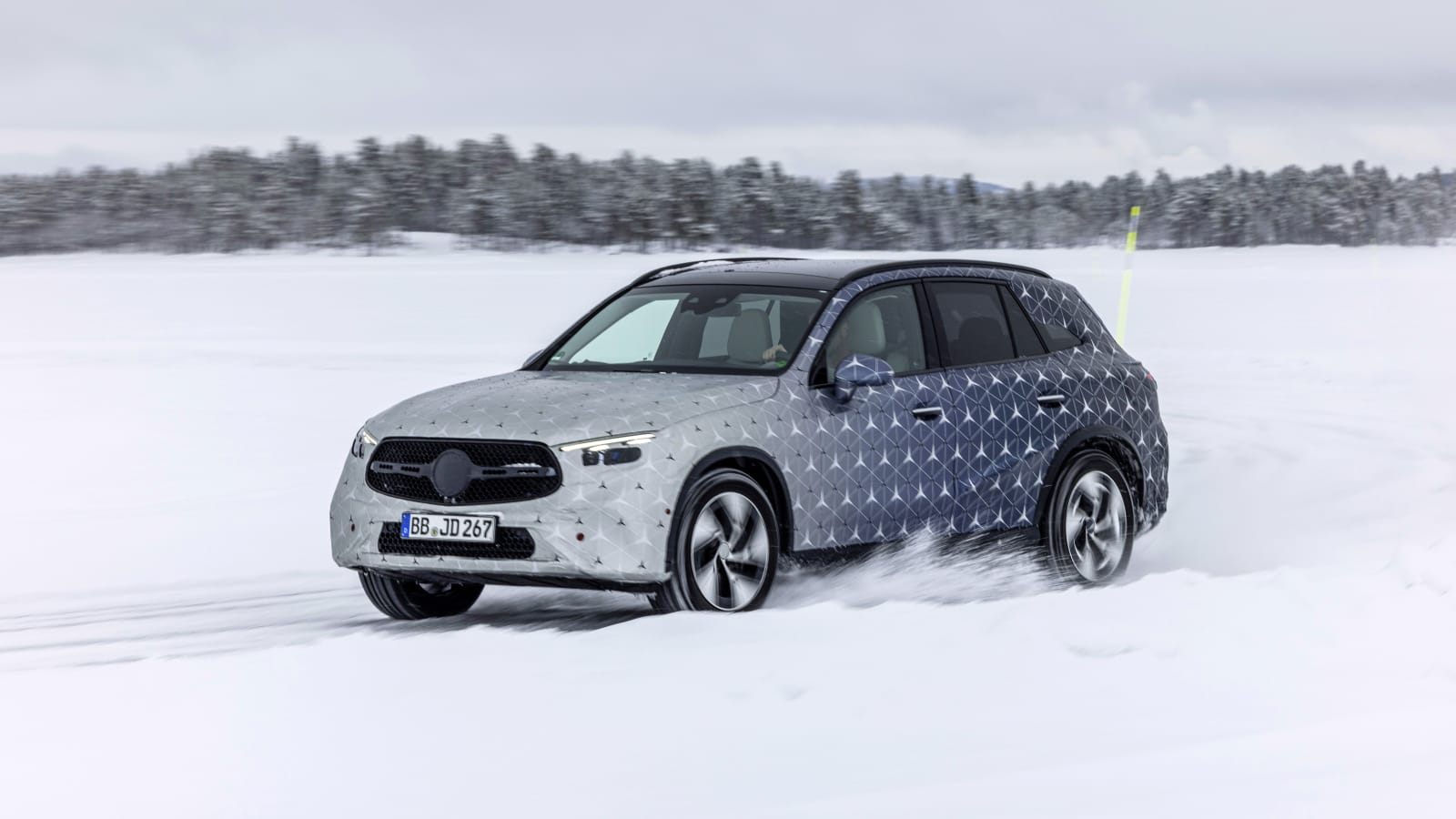 Beyond powertrain specs, Mercedes also provided info on what kind of tech we’ll find in the new GLC. The infotainment system will be the latest MBUX software, and it will play on an 11.9-inch central display. You’ll also get a 12.3-inch digital instrument cluster, and both of those screens will be standard equipment. Mercedes’ next-gen steering wheel seen on all of its new models is also making an appearance on the GLC. It’ll bring touch panels on the wheel for controls, which is one recent Mercedes innovation we’re not entirely fond of.

An Off-Road drive program will be selectable, and within here you’ll find a new “transparent hood” option that uses cameras to show a real time view of the ground underneath the front of the car. If anybody is off-roading a GLC, this would be a useful feature, though we highly doubt many are using their GLCs on the trails. Another cool and showy feature is a new Digital Light option that allows for “customizable Coming Home / Leaving Home animation.” We’re not entirely sure what this will look like, but we’re intrigued to find out.

The final details Mercedes released today concern its driver assistance systems found in the new GLC. The adaptive cruise control feature is newly able to detect stopped vehicles on the road when you’re traveling at speeds up to 60 mph (it was only 37 mph before). The Active Steering Assist (lane following) is able to detect additional lanes around you, and Mercedes says it has improved the system’s performance on curvy country roads alongside improvements to the centering system on highways. The Traffic Sign Assistant is able to detect and warn you from driving through stop signs or red lights. And lastly, improved parking sensors should make low-speed maneuvering better with the new GLC.

Mercedes finishes its technical info drop by telling us that we’ll see this generation of the GLC for 2023. That would mean that a full reveal of the SUV is surely coming this year.