SANTA BARBARA, Calif. – The 2023 Mazda CX-50 isn’t intended to be an answer for the Forester Wilderness, but Subaru’s extra-rugged compact SUV is still important to our story. Specifically, Subaru shared some data during that car’s press launch that indicated how popular the Forester already was among those who camped, hiked and used their vehicle to carry kayaks and such. You know, outdoorsy people. However, just below the Forester on various graphs demonstrating outdoorsiness was a surprising entry: the Mazda CX-5. Despite its sporty on-road focus and premium aspirations, turns out its appeal for those travelling off the beaten path is higher than average for the segment. “Hmm,” we thought, “Mazda could probably lean into that with a new, more outdoorsy SUV.”

Two weeks later, the CX-50 was revealed. It’s not a special version of the CX-5, however: it’s an entirely new, unique model built on the same platform as the Mazda 3 and CX-30. Compared to the CX-5, the CX-50 is a significant 6.7 inches longer, 3.1 inches wider and 1 inch higher off the ground, the latter of which obviously enhances its off-road capability. Further for that goal, the CX-50 gets a special Off-Road drive mode, plus a Towing mode, along with slightly tougher looks courtesy of blockier fender flares and a greater emphasis on gloss black trim. Still, it’s unmistakably a Mazda, and if anything, actually prettier than the CX-5 thanks to those same aesthetically beneficial lengthened, widened and lifted proportions.

That’s a good thing, because being bigger on the outside doesn’t really translate to a bigger interior. In fact, the CX-50 is a smidge smaller in a few dimensions. If you’re looking for a bigger back seat or more cargo volume from a Mazda SUV, you won’t find it here, although it does have a notably longer cargo area, which can be more beneficial than overall volume. 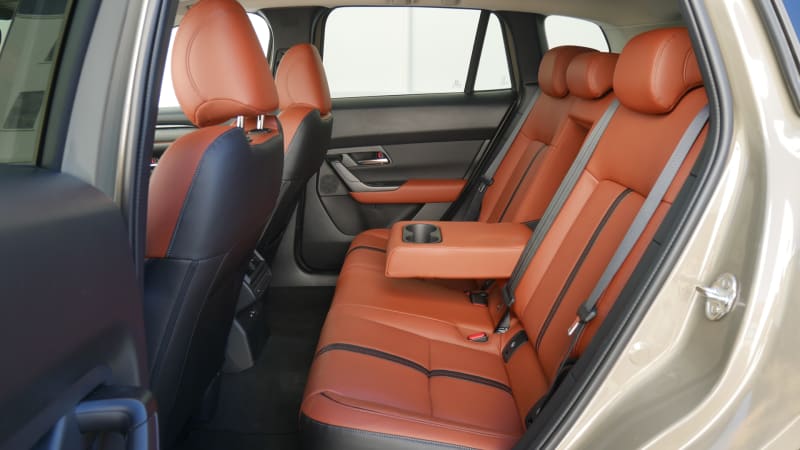 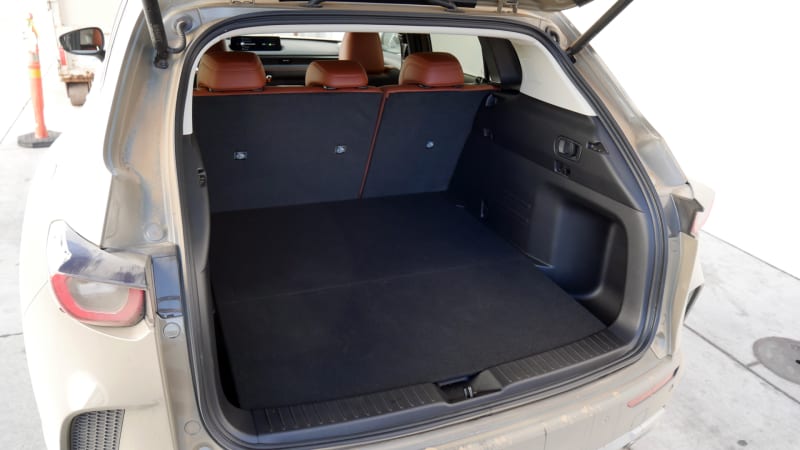 There’s not really anything comparably sized within the regular compact SUV segment – the Genesis GV70 comes close in the luxury realm, while the midsize Chevy Blazer has a similar big-on-the-outside, small-on-the-inside thing going on. Besides its dimensions, the CX-50 is actually more indicative of either a midsizer or luxury model in that if feels more substantial and planted. You do get a sense of its larger footprint, particularly the added width, and Mazda’s efforts to give it a more premium vibe than the RAV4s and CR-Vs of the world. That makes it a happier highway cruiser, which we can attest to after putting on hundreds of miles worth of Highway 101.

It also showcases Mazda’s typical obsession with ensuring that the primary controls and overall vehicle dynamics behave in a natural, immediate and, quite simply, exceptional way. Its engineers keep various classic cars on hand with a particularly commendable attribute (say, a good steering rack or rear suspension tuning) to benchmark greatness regardless of what’s happening now. They chart things like the muscle reactions of a calf while pressing the throttle and make sure the initial engine reaction aligns with it to prevent inconsistent, jerking responses (particularly with a turbo engine). They shun things like adjustable steering settings and torque-vectoring all-wheel-drive systems because of a belief that they feel unnatural, inconsistent and/or different than what people expect from a vehicle’s dynamics. They programmed the CX-50’s five drive settings to change various vehicle parameters to ensure the car behaves and feels consistent despite various drive situations, as opposed to trying to make it feel like five different cars.

Importantly, they concocted G-Vectoring Control, a unique system that’s frankly a little hard to get your head around, whereby the car effectively shifts weight onto the front tires, therefore increasing steering precision and response. This is actually the key to the whole shebang, because all those drive settings and their ability to maintain the CX-50’s consistent driving feel depend on GVC. On a winding mountain road, putting the CX-50 in Sport did indeed make it turn in more crisply and eagerly than just keeping it in Normal. The result is yet another Mazda that just feels right behind the wheel, like it’s an extension of your body. It can be a lot of fun. 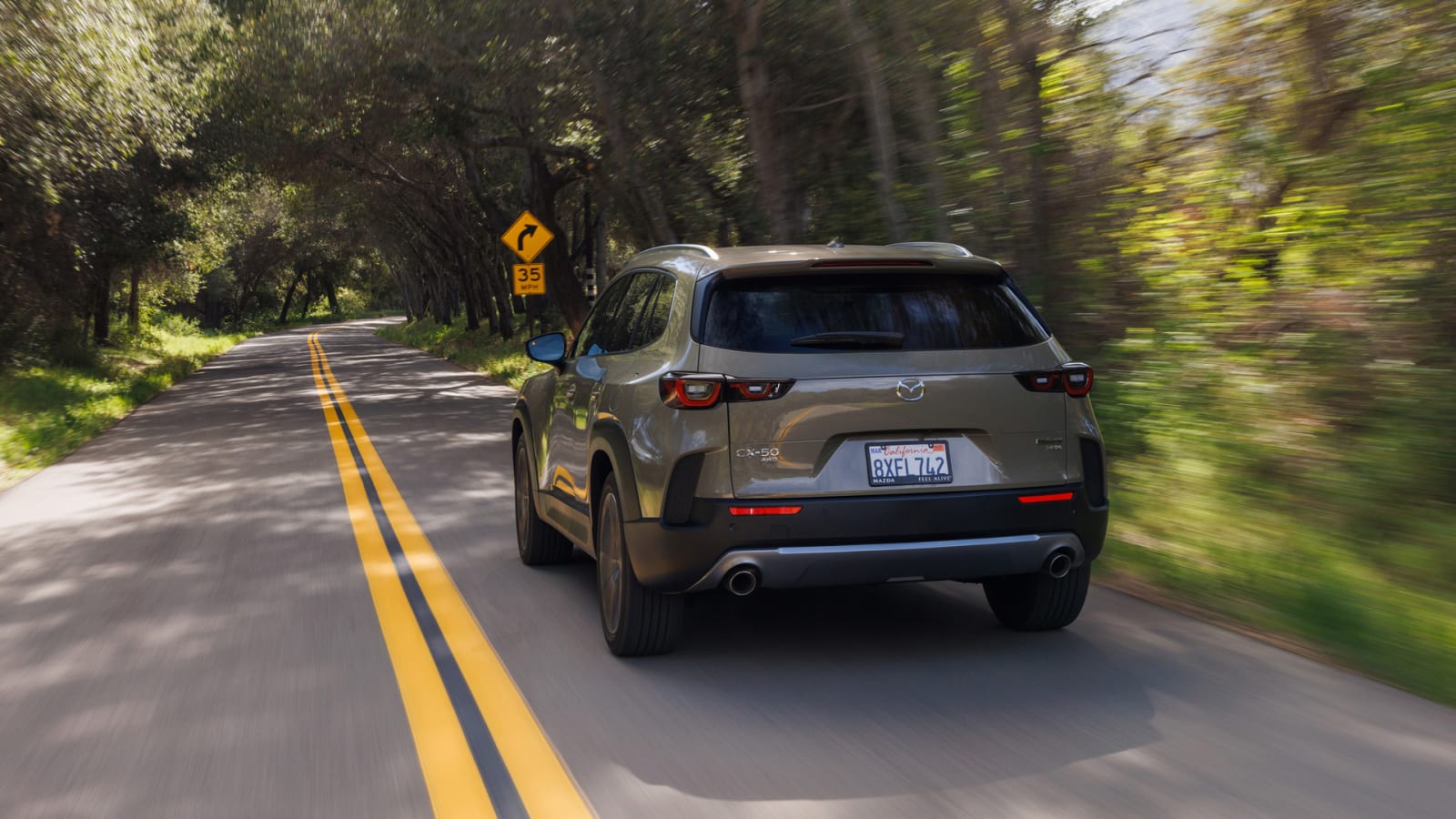 Hold on a second, isn’t this supposed to be a more rugged SUV? Well, it is … to an extent. According to project manager Mimi Battistella, the CX-50 came about because Mazda recognized an overall increase in Americans venturing outdoors, and as the CX-5 is a global product, it saw room to lean into the trend with a new product specifically for the North American market. That trend increased with the pandemic. They didn’t exactly have the sort of outdoorsy customer data that Subaru shared, but the same use case was envisaged. The CX-50, like the Forester Wilderness, is meant to be more rugged for the purposes of getting you just far enough off the beaten path that you can park it and do something other than driving. You know, like camping, hiking and general outdoorsiness.

“No matter how much of an outdoor adventure lifestyle trip you are taking, much of it is still taking place on pavement,” said Mazda vehicle dynamics manager Dave Coleman. “Only the last couple of miles are bouncing around on the way to the campsite … There was a lot of room to improve our existing hardware without compromising our efficiency or comfort on-road.”

Extra ground clearance was one area, with 8.3 inches (base engine) and 8.6 inches (Turbo), being greater than average for a crossover, if falling just short of the base Subaru norm (the Forester and Outback Wilderness are in the 9’s). However, further turning the dial up on GVC plays a big role here too, especially at higher speeds on dirt or gravel. We ran the CX-50 on the same stretch of dirt road twice at 30 mph, first in Off-Road mode and next in Normal. There is indeed more steering precision and confidence present (not unlike a rally driver left-foot braking into a corner to put more weight on the front tires), plus the transmission, traction control and all-wheel-drive systems are tweaked for ideal reactions. The CX-50 will also detect when you’re stopped on an incline and automatically increase the idle speed to prevent rolling back or jerky acceleration when moving forward again. 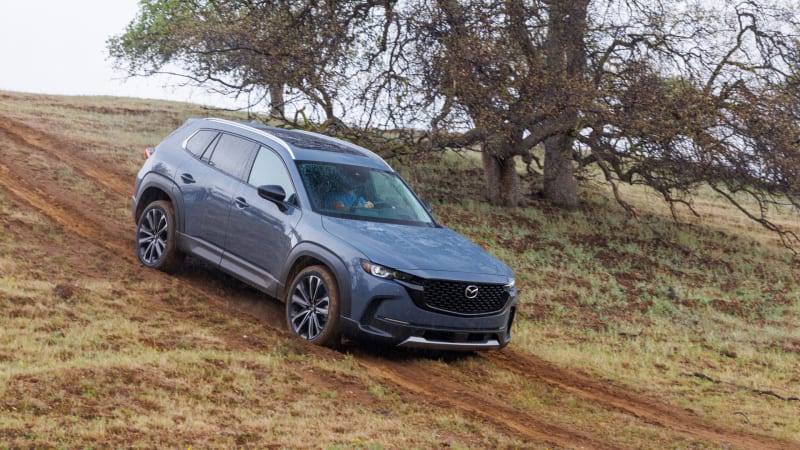 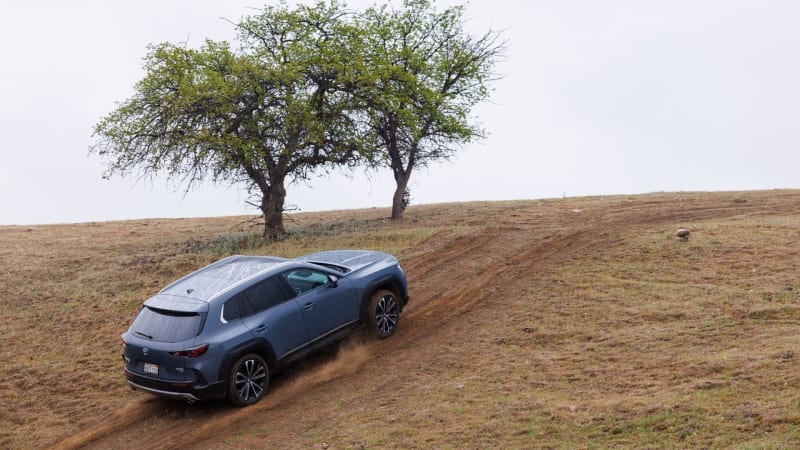 Coleman’s team toyed around with multiple off-road settings for different surfaces, but after frequently finding themselves in situations that presented a mix of conditions, they decided to go with one well-rounded Off-Road mode. They didn’t bother with hill-descent control, either.

We don’t disagree. We nosed down a steep hill on a loose dirt surface with a foot planted on the brake and the ABS expertly pulsing to maintain control and forward progress. No biggy. We’ve tackled similar challenges at other press launches for the purpose of demonstrating hill-descent control and have indeed wondered whether it was necessary. Perhaps in extreme situations, but this isn’t an SUV for extreme situations. 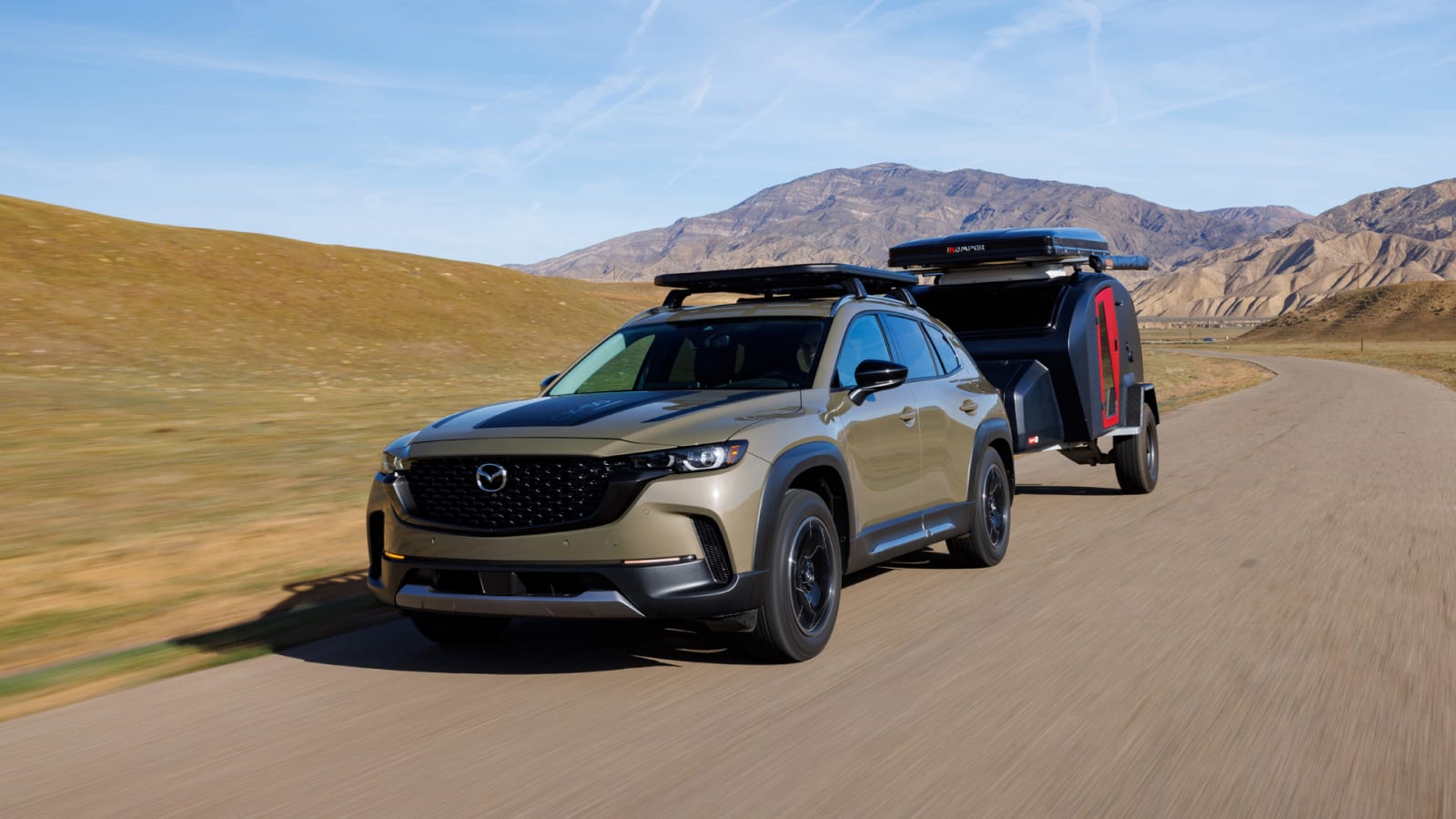 Similarly, the CX-50 Turbo can tow 1,500 more pounds than the CX-5, but that still only amounts to 3,500 pounds (the base CX-50 engine results in the same 2,000-pound rating). That should be good for some dirt bikes, a small boat or a camping pod trailer. With that higher rating, the Turbo adds a special Towing mode that increases the all-wheel drive’s minimum rear torque split to reduce yaw motions from a trailer, and – surprise, surprise – GVC is increased to its highest possible amount to counteract all those pounds at the rear lifting weight off the front tires. The difference there was honestly harder to detect while towing precisely 3,500 pounds of trailer and concrete (NOT what’s pictured above), but the CX-50 seemed confident enough and the turbo engine seemed up to the task during the brief test.

Speaking of which, the CX-50 is offered with the same powertrain options as the CX-5 and CX-30, including standard all-wheel drive and a six-speed automatic. A 2.5-liter naturally aspirated inline-four producing 187 horsepower and 186 pound-feet of torque is standard (it returns 27 miles per gallon combined), while the available 2.5-liter turbocharged inline-four cranks things up to 227 hp and 310 lb-ft of torque (25 mpg combined). As in its siblings, that output is far greater than most compact SUVs come close to offering and, in the CX-50 at least, seems like a must for ensuring that more substantial, premium feel, particularly on the highway, and for fully appreciating its on-road talents. That said, we did not sample the base engine, and considering it’s perfectly capable in the CX-5, we doubt it’ll be any different in the CX-50, which effectively weighs the same 3,700 pounds. 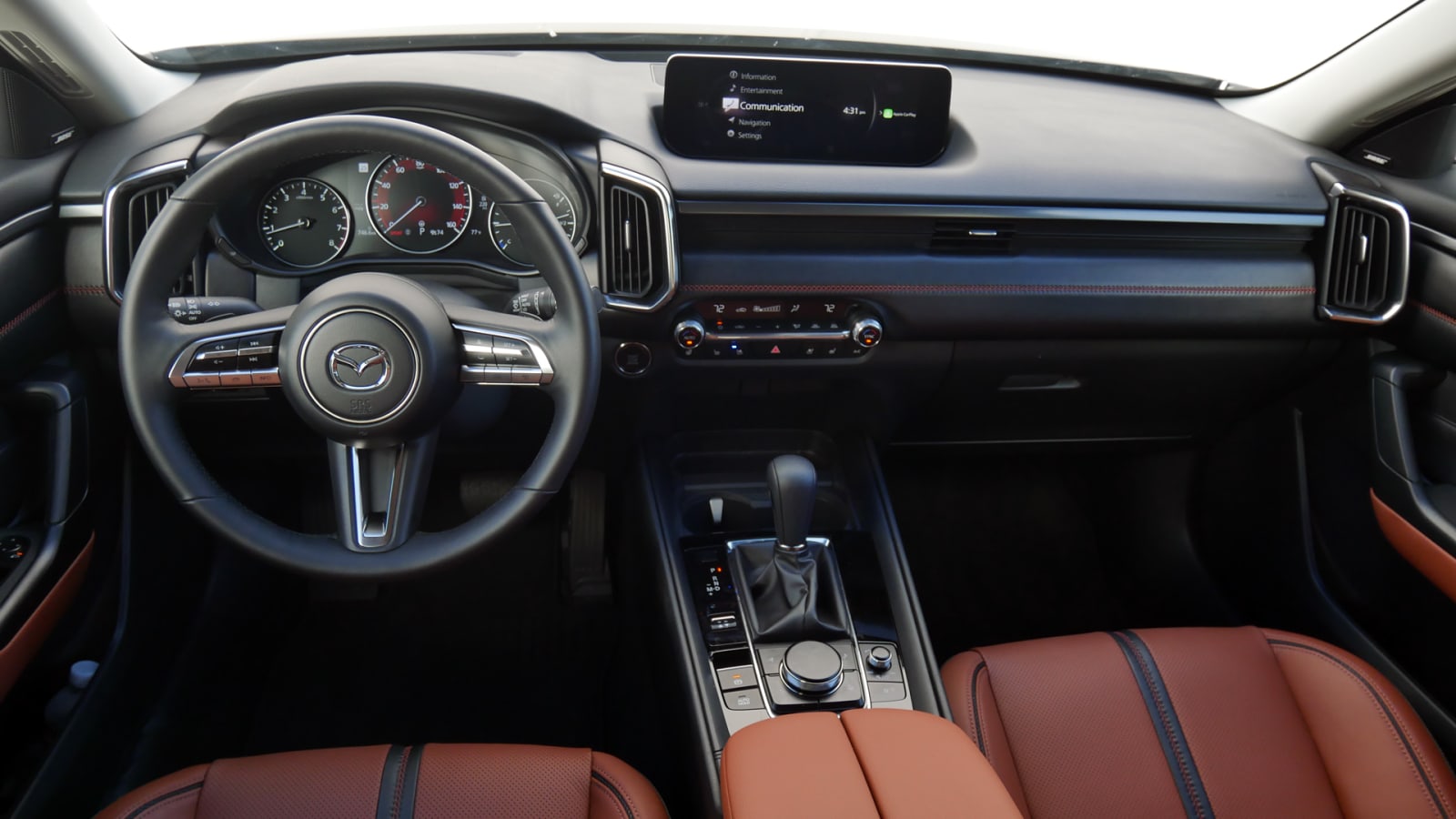 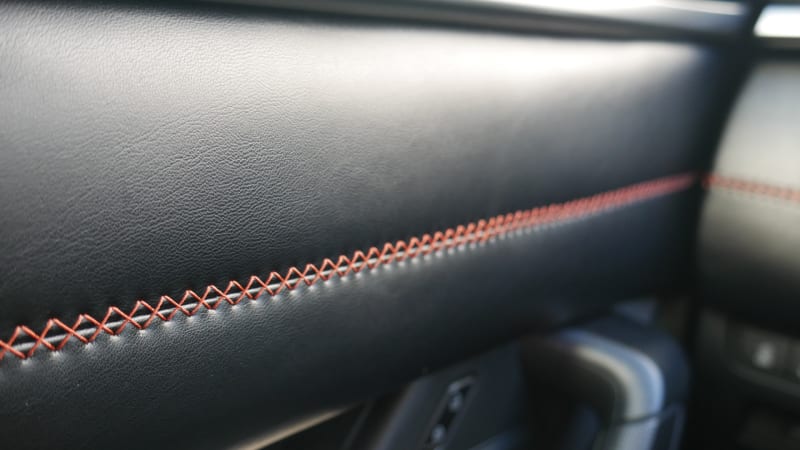 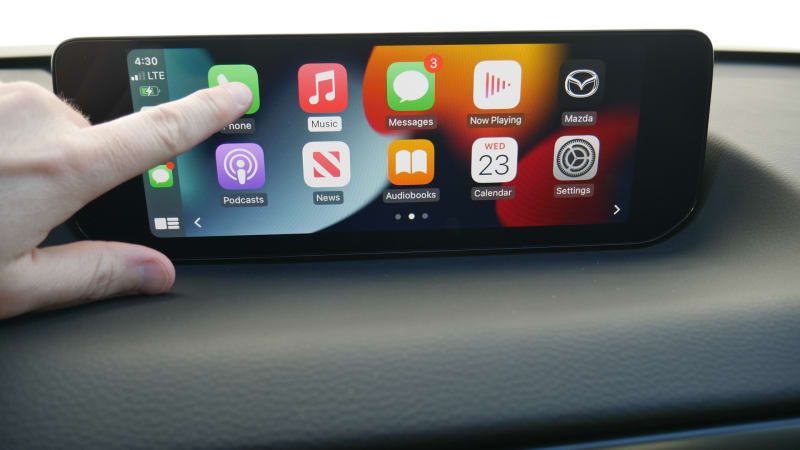 We also only sampled the range-topping 2.5T Premium Plus trim level, and considering Mazda hasn’t released interior images of other trim levels, it’s hard to tell exactly how much you gain or lose in terms of materials quality. At the very least, the contrast stitching you see here is special to the top 2.5T Premium and 2.5T Premium Plus trim levels ­– and it looks pretty cool, with its distinctive crisscross pattern bisecting trim that sure looks and feels like leather. The Terracitta orangish-colored leather found in our test car provides a rich ambience too, and is unique to the CX-50 ­– so is the Zircon Sand Metallic exterior paint that pairs so handsomely with it.

The interior design is consistent with the rest of the Mazda line, but the blockier, upright air vents add a slightly more muscular vibe consistent with the exterior. The big difference, however, is the 10.25-inch widescreen display found on all but the base trim level. Mazda’s menu structure, including the radio and integrated navigation system, continues to only be controlled by the console-mounted Commander knob and menu shortcut buttons. However, that display now features touchscreen functionality that only works while using the standard wireless Apple CarPlay and Android Auto systems, including while moving, as Mazda has accepted that they’re better controlled by touch. The Apple/Android systems can still be controlled by the Commander knob, as well since it remains a good tool for flipping your way through lists of songs or contacts. The screen is quite a reach, but then it’s also mounted close to your line of sight and therefore less of a distraction … which is exactly the point of Mazda’s setup in the first place. This is a decent compromise, but we admit it won’t be for everyone.

Pricing starts at $28,025 for the base 2.5 S, which, again, comes standard with all-wheel drive. The base 2.5 Turbo starts at $37,625, while the 2.5 Turbo Premium Plus shown here goes for $42,775. Pricing for the Meridian Edition, which turns up the rugged knob to max with all-terrain tires, hood graphics and a host of still-to-be-finalized accessories, will be announced closer to its on-sale date. This pricing works out to be about $1,000 more to start than a CX-5, and $4,000 more than the priciest CX-5 Turbo Signature. That seems appropriate given the increased capability, refinement and more premium looks. The CX-50 really does come across as a step above the usual compact SUV norm, and, sure, should probably be better for campers and hikers, too.